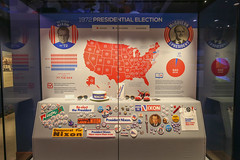 I was recently at the Richard M. Nixon Presidential Library and Museum in Yorba Linda. Having never before taken the time to learn much about Nixon, my impression of him, molded by superficial academia and mass media, was that he was corrupt, disgraced, and most definitely a “crook”.

Perusing the exhibits, I learned for the first time about what might have been one of the best presidents in United States history. His accomplishments both within the country and in relations with other countries are numerous and impressive. Why has his reputation been watered down to Watergate? Even there, it seems that what actually happened is not be as bad as what the general public has been led to believe. Nixon himself offered in 1978:

Some people say I didn’t handle it properly and they’re right. I screwed it up. Mea culpa. But let’s get on to my achievements. You’ll be here in the year 2000 and we’ll see how I’m regarded then.

Now in 2018… it seems that he remains best-known for Watergate.

He also had some amazing campaign songs:

Thanks to the great exhibition displays at the museum, I look forward to learning more about our 37th president. Happy Election Day!