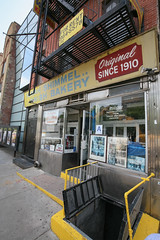 A little bit late, but Happy New Year! I just finished reading Hasia Diner’s book Lower East Side Memories: A Jewish Place In America. For several decades around the end of the 19th century and beginning of the 20th, many Jewish people from immigrated from Europe to the United States, with many of those living either temporarily or permanently in a Manhattan neighborhood subsequently known as the Lower East Side. Not all of the Jewish immigrants lived in the Lower East Side, and not all of the Lower East Side immigrant residents were Jewish at all. But that particular subset of immigrants created a culture in that neighborhood which formed a primary basis for Jewish culture throughout the country.

Many Jewish immigrants ended up in Boston, and in Chicago, and in St. Louis, and in Los Angeles, and in other cities across the country, and even in other parts of New York City. But a clear majority ended up staying in the Lower East Side, filling cramped apartments with so many people that Jewish culture flourished, and was easily found not just in the privacy of individual homes, but openly on the streets, in shops, in restaurants… And with such overcrowded housing, there was little privacy anyway, leading to characteristically private conversations happening in larger groups, spreading and sharing cultural ideas even further.

In this atmosphere of open exchange, many artifacts of historical and cultural record were created. Factual accounts were written. Journalistic photographs were taken. Novels and plays and poems and songs were authored, all in much greater abundance than what happened in other Jewish communities.

That wealth of history about, and emanating from, the Lower East Side surely would have been significant in its own right, but after the 1940s it became even more significant. Through the Holocaust events of World War II, huge amounts of European Jewish culture and history were destroyed. Many people were killed, yes, but on top of that, houses and businesses and religious institutions were wiped out. Italian immigrants still had Italy. Irish immigrants still had Ireland. But the Jewish people who had left their “old world” homeland for the “new world” in the United States no longer had an “old world” to correspond with or to ever return to, even for a visit.

As such, the Lower East Side took on a new level of importance in Jewish-American culture: it became their new “old world”. Whether if they ever actually lived there or not, through historical accounts and stories and other media created in or about the neighborhood, Jewish people all over the country began to see it as a common ancestral home. They started to travel to the neighborhood, take tours, sample food, and learn more about what “real” Jewish-American life was like.