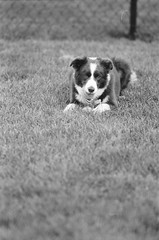 I just finished reading Alexandra Horowitz’s book, Inside of a Dog, an easy-going look at what behavioral and cognitive psychology can tell us about how dogs perceive the world. Many questions I had about the behavior of my own dog — including some that I hadn’t bothered to form very precisely because I wasn’t really expecting to ever find out — are answered here as convincingly as I could hope for.

Do dogs see in color? Despite longstanding myth to the contrary, dogs do see in color, but while humans generally see across a spectrum of red, green, and blue (with colors in between), dogs only see across green and blue. Different shades of red (or orange or yellow or other reddish colors) may appear distinct to them, but not as blatantly distinct as they do to us. Asking your dog to distinguish between an orange ball and a yellow ball could be more challenging than you might expect!

Can dogs see television? They can, but they probably aren’t very interested in it. While dog vision is in some ways less precise than ours (such as with color spectrum), they can perceive movement at a higher frame rate, if you will. We are convinced of seeing movement on a television or film projector if the pictures are changing at 30 frames per second, or even a little slower. Dogs, though, aren’t fooled, and instead can see the lack of continuous motion. It would take something more like 60 frames per second to look believable to a dog, so they would still be unimpressed even with some recent movies…

With our eyes, we see what is happening right now; with their nose, dogs smell what is happening right now, what has happened in the past, and, to a degree, what is about to happen in the future. When taking your dog on a walk, the author admonishes, don’t presume to drag him away from smelling something irrelevant to you. Those smells communicate knowledge to your dog! [I admit that I have been guilty of doing exactly that, but am lingering to let my dog smell more on walks now.]

(Their reliance on smelling probably also comes into play if they express disinterest at watching television; no smells are projected on the screen to accompany what they are supposed to believe they are seeing!)

It is well-known that dogs can hear much higher pitches than we can; thus, the inaudible-to-humans dog whistle. Considering the sonic world from the perspective of a dog requires us to take into account this wide spectrum of high pitches. Some common machines, even common lighting fixtures, make sounds which we are blissfully unaware of, but which dogs are constantly enduring. [I have wondered myself if my dog’s aversion to being photographed has any connection to the ultrasonic focusing mechanism in modern camera lenses?]

Dogs are believed to be unusually intelligent. The author shows disappointing intelligence test results, but suggests that dogs convey great intelligence in one regard in particular:

Dogs … see us as fine general-purpose tools, … useful for protection, acquiring food, providing companionship. We solve the puzzles of closed doors and empty water dishes. In the folk psychology of dogs, we humans are brilliant enough to extract hopelessly tangled leashes from around trees; we can magically transport them to higher or lower heights as needed; we can conjure up an endless bounty of foodstuffs and things to chew. How savvy we are in dogs’ eyes! It’s a clever strategy to turn to us after all. The question of the cognitive abilities of dogs is thereby transformed: dogs are terrific at using humans to solve problems, but not as good at solving problems when we’re not around.

Which is not to say that dogs do not also express aptitude for intelligence on their own, for they do. Even more remarkably, they exhibit, at least in measure, a theory of mind. They look at both humans and at other dogs as individuals with their own minds and their own intentions and behaviors. They express surprise when they witness things which appear to defy their sense of logical expectations. When they play with other dogs, they communicate with them that play is about to commence (and thus any nipping should be taken in fun, not as an attack), and more powerful dogs deliberately handicap themselves when roughhousing with less powerful dogs, so as to level the playing field of their game.

After reading this book, I see my own dog differently now. I am more conscious of how she must see me, and how she must see other people, and other dogs, and the world around her. The author shows us that dogs are, among all animals, those best suited to be with humans: to live with us, to be companions with us, and that they and us both are better off for it.