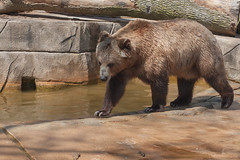 Sometimes books sit on my shelf for a long time before I get around to reading them. This particular book sat mostly unread for about ten years. With a new software project starting up that desperately needs sensible design, I finally finished reading Alan Cooper’s The Inmates Are Running the Asylum.

It’s like the fellow who leads a huge bear on a chain into the town square and, for a small donation, will make the bear dance. The townspeople gather to see the wondrous sight as the massive, lumbering beast shambles and shuffles from paw to paw. The bear is really a terrible dancer, and the wonder isn’t that the bear dances well but that the bear dances at all.

Cooper argues that software users have endured many technological dancing bears, and that these users end up as either “apologists” or “survivors”. The apologists are delighted that the software functions, and make excuses for its poor user interaction design, claiming that it’s not really all that bad, and you just need to be more computer literate in order to use it. The survivors are less persuaded about the goodness of the software, but they don’t want to appear stupid by complaining about it, so they just quietly put up with it.

Unfortunately, most of the people involved with creating software lean more toward the apologist side, failing to understand how incomprehensible the software comes across to people who do not enjoy challenging themselves with computer interaction puzzles.

When left to their own devices, programmers build software the way that makes the most sense to them. They frequently do not “design” the user interaction aspect at all, but rather just start coding. That may work well enough for programming tools like compilers and debuggers and text editors, but software that is meant to be used by non-programmers should take into account how those users think, and what those users want to do with the software.

Confusing, poorly-designed software development can be especially problematic when building custom software used internally in a business, for it is being foisted upon employees who lack the option to avoid using it.

Badly designed business software makes people dislike their jobs. Their productivity suffers, errors creep into their work, they try to cheat the software, and they don’t stay in the job very long. Losing employees is very expensive, not just in money but in disruption to the business, and the time lost can never be made up. Most people who are paid to use a tool feel constrained not to complain about that tool, but it doesn’t stop them from feeling frustrated and unhappy about it.

Cooper recommends that deliberate design should be a major part of a software project, and that it should take place before any user-facing software is written. Further, the design would best be done not by programmers, who are expert in intricate, mentally-challenging details, but rather by dedicated designers, who are in position to better advocate for the users. (It is conceivable that programmers could also be good designers, but there is often too much conflict of interest.)

What would good design look like? The second half of the book is overflowing with helpful ideas. Hitting on a few topics:

Many ideas that Cooper recommends for better software design I see happening today. Progress is being made; software is better than it was ten years ago. But many of the problems of bad software design still linger on. Perhaps most disconcerting is that the very concepts of software design that Cooper outlines seem to be neither taught in computer science education, nor advocated for in common practice. Clearly some programmers, some companies, must be implementing ideas along these lines, but the status quo appears to still be apologist programmers skipping the design phase on the way to shipping dancing bearware, which may or may not get iterated into something good.

For software developers, I cannot recommend this book highly enough. I only wish that I had read it ten years ago, and maybe again every year since then. If you know a software developer, it’s not too late to get free Amazon shipping before Christmas.

I think it is now clear that, written in 1960s, Randy Newman’s song Simon Smith and the Amazing Dancing Bear is in fact about a programmer who skipped the design phase, dumping ill-conceived computer software on unsuspecting users: