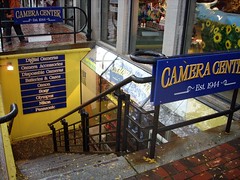 This week Google announced and released their new photo sharing service. I mostly use Flickr, but I had a handful of photo collections in Google Picassa years ago, which got dragged over into Google+ photos, and now have dutifully arrived in Google Photos.

As an overall interface for viewing photos, Google Photos seems nice, but not particularly better or worse than Flickr. There are options to share photos on Facebook, Twitter, and Google+, but I see no way to get various-sized photos to embed within web pages as I do with Flickr.

I also see no way to tag photos, but this might not be significant, as the facial, object, and location recognition built in to Google Photos is so accurate that it comes across frightening to this privacy advocate.

Facial recognition in my photo sample set is almost perfect. If the face is looking straight on, or is turned to the side, or is wearing a hat — doesn’t matter. Google Photos can pick out the face. It also correctly identified photograph locations including Boston, Washington D.C., Cedar Rapids, Omaha, Irvine, Joshua Tree National Park, and San Juan Capistrano, seemingly based on photographic content. (My ancient Canon 5D camera doesn’t have a GPS to embed location data, and my even more ancient Canon EOS-3 film camera certainly doesn’t embed location data!)

Object recognition was nearly as accurate, with a search for “food” including pictures of restaurants, pictures of food on a plate, and pictures of unpicked vegetables growing — though I was amused to see a picture of a live crab in an aquarium counted amongst “food”… not strictly incorrect, but unexpected.

The two main things that I do with photo sharing is to set up a place to store, share, and browse photos, and to embed them into web pages (such as this blog post). Google Photos does a fine job of the first set of tasks, but apparently not so great at the second task, so I will be sticking with Flickr for the time being.

The content recognition software behind Google Photos is outstanding, but might open a whole new can of worms in terms of reasonably expected privacy. Obviously, anyone sharing a photo in public would not expect privacy of the photo itself, but the fact that so much data can be automatically sucked out of the photo could easily give one pause. And it doesn’t really matter if your photos or stored on Google Photos or not, as Google can find and analyze photos from Flickr or from any public photo site.